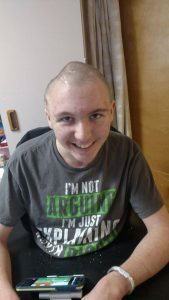 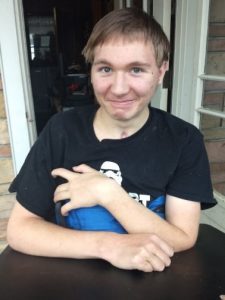 Nathan Andera has made miraculous strides since an accident in his home back in May of 2017 that nearly took his life. He was just 15-years-old.
“He’s come so far, and is still making progress,” says his mother, Cathy.

Nathan suffered a critical head injury to the right side of his brain that required specialized trauma care. When minutes were critical, Mercy Flight responded with urgency to transport him from Olean General Hospital to ECMC for brain surgery.

“Mercy Flight had him landed and in surgery when we arrived hours later because we had to drive to Buffalo from Olean. He needed to be worked on immediately and we all truly believe that the speed of this flight is the reason he is doing so well today.”

It was at ECMC that he spent 4 ½ weeks in a medically induced coma to stem swelling on his brain. He was in the TICU (Trauma Intensive Care Unit) for his injuries.

“Nathan came home from the hospital right before Christmas,” Cathy exclaims. “He is quadriplegic, but we are incredibly blessed he is doing so well.”

He is currently undergoing rehabilitative care near his home in Allegany to learn how to walk again and be more independent.

“We were told that he had a low chance of survival when the initial incident happened, but we had hope, and hope gets you far,” she adds. “That hope was in the form of the Mercy Flight helicopter and its heroes on board who helped our son.”

Told he would never see or talk as an injured baby, this young man amazes those around him