The day my life forever changed 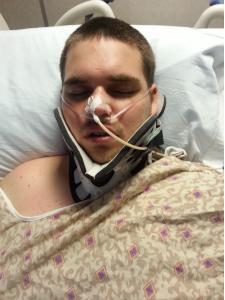 I was riding down RT-33 headed to Batavia on my motorcycle, and a deer ran out in front of me. I had zero time to react and ran right into her.

After that, my mind went blank, but I now know what happened, thanks to the people who saved my life. They are now my friends.

The call went out minutes later that a motorcyclist was found in the middle of the road with severe head trauma.  Mercy EMS, along with Pembroke fire, were on the initial alarm.

The medics arrive and called for Mercy Flight standby. Unfortunately, the Batavia bird was already on a call, and the next closest bird was the one in Olean.

I was in and out of consciousness when they tried to remove my helmet and found it broken apart. That’s when they knew I suffered a serious head injury. The bird came in and I was put under, so I could be transported to ECMC.

Then I woke up, staring at the hospital ceiling and looking around. I started asking questions about what had happened and the result of my accident. I had suffered a broken right shoulder blade, bleeding on the brain and broken bones in my right ear. I was in a coma for eleven days, until the bleeding stopped.

After weeks in the hospital, I began my recovery at home. I had a talk with my mother about this and she told me my girlfriend was at the hospital every single day. I told her I was going to ask for her hand in marriage. My mother replied, “I’m proud of you.”

The following year we got married in our backyard. When creating our wedding guest list, we had three people we knew must be there – the supervisor and the ambulance crew from Mercy Flight who helped to save my life. By then I befriended all of them.

Shortly after my wedding, we decided to pay it forward. 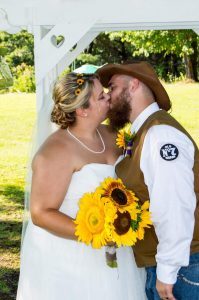 We went down to our local fire department and filled out the applications to become firefighters. Well, my first called was to setup a landing zone for Mercy Flight – WOW, how ironic!

I’m now a firefighter for Darien Volunteer Fire Company and my wife is an EMT for Darien EMS and Darien Lake Theme Park. Please pay it forward – that is all we ask. When you hear the Mercy Flight chopper, know that someone who is having a very bad day is in very good hands.

Special thanks to Brandon Scott from Darien Volunteer Fire Company for telling his story.

Thank you again Mercy Flight for saving my life…and my feet!