It was November when Jarred, a high school senior, woke up to get ready for another day of school in South Dayton. Being that it was just like every other Monday morning, he doesn’t remember many details – like what he was wearing or what he ate for breakfast. What he does remember, though, is there being a little bit of snow on the ground. Before he knew what happened, there was metal twisted around his body. Driving into school, Jarred’s car slid on a patch of black ice and collided head-on into a tree. 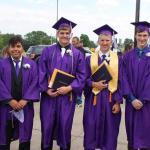 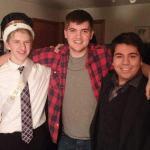 Mercy Flight was called to the scene by the first responders. A flight nurse was lowered into his vehicle to begin lifesaving care while first responders worked to free him from the wreck. Jarred remembers the flight nurse saying, “He needs an IV right away,” and recalls that she made him start to feel comfortable immediately. Once freed from the wreckage, Jarred was flown to ECMC where he underwent surgery. He suffered from a concussion, a shattered femur, countless lacerations, and had to face the ultimate task of learning to walk again.

Jarred woke up in the hospital with a casts and braces on both legs and his neck. He was determined to walk across the stage when graduating from Pine Valley Central High School just seven months later – although doctors said it would be impossible. He had to miss six months worth of school, but with hard work and perserverance he was able to participate in graduation the following June.

“If it wasn’t for Mercy Flight I would have died that day.” Jarred states. “Without them, I wouldn’t have walked across the stage at graduation or danced at my senior prom. Without Mercy Flight… I wouldn’t be here to tell my story.”

Hope came in the form of a Mercy Flight helicopter for young girls, Maddy and Tori