By Kate GlaserFebruary 8, 2018No Comments 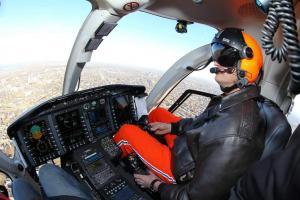 A hero can be defined as someone who has given his or her life to something bigger than oneself. If heroism can be quantified, then the stories of first responders and EMS personnel, who answer the call when emergency strikes, can be told in sheer numbers.

Starting my career with Mercy Flight back in June 2017 was a thrilling life change. The mighty helicopter, a lifesaving machine, coupled with the parade of orange uniforms worn by the medical and aviation professionals, prove that working at Mercy Flight is nothing short of awe-inspiring.

Almost everyone knows that when a helicopter, adorned in orange and blue, roars overhead, it’s Mercy Flight on its way to the scene of an accident or to a specialized care center for a patient transfer.

But some may be surprised by the complexity of this nonprofit, rapid response organization.