By Mercy FlightNovember 14, 2019No Comments 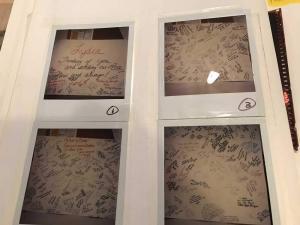 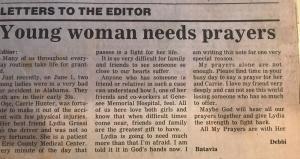 When Lydia Grossi-Young woke up on June 1, 1990, she had no idea that what occurred next would change her life forever. That morning, Lydia and her friend, then both nursing students, were driving down Route 77 on their way to a summer course when they collided head on with a tractor-trailer. Headed uphill, Lydia did not see the tractor-trailer due to a blind spot until it was too late. Within a matter of seconds, Lydia swerved her car, lost control, and ended up underneath the large vehicle, leaving the two women trapped and in dire need of emergency medical services.

Within minutes, the Mercy Flight crew was on the scene, ready to take action. Once the chopper landed, the crew immediately rushed to Lydia’s aid. They quickly realized that the injuries she sustained left her in a highly critical state. Most notably, this accident left Lydia with a transected aorta, causing her to bleed out of her chest profusely. Needless to say, her outlook was looking rather grim.

Lydia was rapidly flown to the Erie County Medical Center trauma unit, where she was put in a drug-induced coma. Aside from her transected aorta, Lydia sustained multiple internal and external injuries, such as broken ribs, a ruptured spleen, and a lacerated liver. Due to serve head trauma, she does not remember anything from the accident and her transportation to the hospital. After the accident, Lydia was informed that she would not be able to bear children.

“They don’t really know how I survived this, especially because I had blood pumping directly out of my major artery,” Lydia said. “I am very lucky to even be here.”

Once she was stabilized, it was highly evident that Lydia’s recovery was far from over. After her time in the trauma unit, she was transported to the intensive care unit for three weeks, followed by the rehabilitation unit. All in all, Lydia spent three months recovering at ECMC. Once she was out of the hospital, Lydia still had to endure six months of outpatient rehabilitation, including speech, occupational, and physical therapy.

Almost 30 years later, Lydia reflects on her Mercy Flight experience with deep gratitude. “If it were not for Mercy Flight, I would not be alive.”

Each and every day, Lydia strives to live a joyous and fulfilling life with friends and family by her side. After being told she would not be able to have children, Lydia beat the odds and is a proud mom of two boys. She even worked at ECMC for some time! “I don’t take anything for granted.” Lydia said with tears in her eyes. “I thank God every single day that I am here.”

Stories like Lydia’s are what give us the hope and drive to continue our lifesaving mission every day. Thank you Lydia for sharing your experience, we are so glad you are here with us today!